Homepage > Matthew (Part 20) - The Death of John the Baptist

Matthew (Part 20) - The Death of John the Baptist

Matthew 14 begins with the reports of Jesus’ activity reaching Herod Antipas. Herod immediately relates the activity of Christ to John the Baptist whom he had put to death. Then Matthew gives an account of John’s death. To understand the surrounding circumstances a bit more, we should briefly review Herod’s family relationships leading to his objectionable marriage. 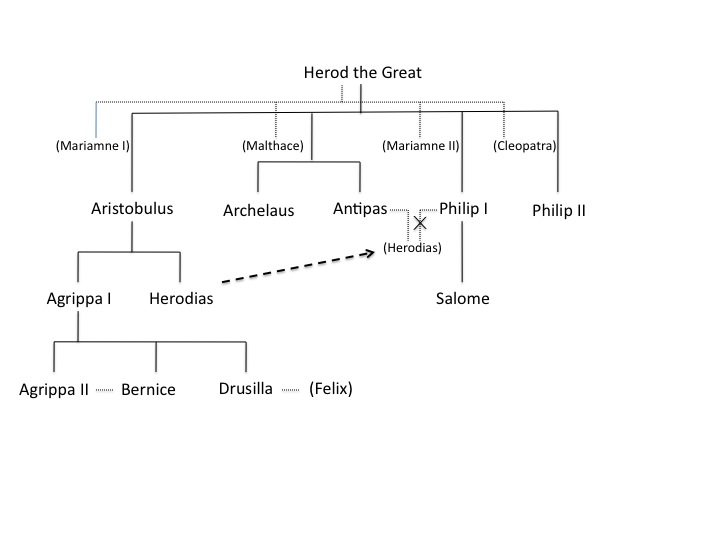 Herod the Great had several sons. We’ll focus only on the ones with impact to our storyline. See the chart below.

Herod the Great’s kingdom was divided at his death among some of his sons. Archelaus became tetrach of Judea, Samaria, and Idumea. Antipas became ruler of Galilee and Perea. Philip II became tetrarch of the region to the east of the Sea of Galilee (north of the Decapolis). Because of his evil and mismanagement of Judea, Archelaus was soon removed from power and the area was governed by a series of Roman governors (of which Pilate, Felix, and Festus were three of biblical note).

Herodias, the granddaughter of Herod the Great and daughter of Aristobulus, was married to Philip I (her half-uncle). She and Antipas decided that they would divorce their respective spouses and marry. This arrangement was that with which John the Baptist took exception (Matthew 14:3-4). Herodias was eager for John to be out of the way and found opportunity through Salome’s dancing resulting in Antipas’ promised gift to her.

Later, with Philip II’s death and Caligula’s rise to emperor, Agrippa I (friend of Caligula) was granted the rulership of Philip I’s former tetrarchy. Additionally, Caligula granted Agrippa the title of king. Herodias, jealous of her brother, urged Antipas to petition Caligula for the same title, which he did. But Caligula did not like Antipas. He removed him from power and exiled him. Herodias and Antipas ended their days in exile in Gaul. Agrippa was granted rule over Antipas’ former tetrarchy and eventually also over Judea. Agrippa ended up ruling all of Herod the Great’s former kingdom and a little more.

After hearing of John’s death, Jesus decided to leave the Galilean side of the Sea of Galilee and travel by boat to a desolate area near Bethsaida on the northwest side of the sea (a distance of only about 4 miles). Because of the relatively short distance, many of the Galilean crowd followed along the shore so that when Jesus and his disciples arrived, they were met with the crowd once again (14:13-14). Why Jesus sought out the desolate location is not specified. Some scholars suggest that Jesus wanted to leave Galilee out of concern that Antipas might attempt to arrest him based on Antipas’ fear of a resurrected John the Baptist (14:2). Others suggest that this was merely a time of needed rest after preaching and healing of the crowds. I tend to think that the decision was one of a more mission-minded strategy.

Interaction with John the Baptist is mentioned three times in Matthew. The first was at Christ’s baptism (chapter 2). The second is in regard to John’s message asking Jesus if he is the one (chapter 11). The third is here in chapter 14 concerning John’s death. After the first baptism (the first meeting with John), Jesus is led to a wilderness (desolate place). Here in chapter 14 after hearing of John’s death, Jesus also seeks out a desolate place. This indicates some similarity between the two events. The first wilderness experience brought temptations to Christ as he began his earthly ministry. The temptations were brought to bear on Jesus because of his hunger (Satan called on him to change stones to bread), his protection by God because of his sonship (Satan called on him to leap from the temple pinnacle to prove protection), and his mission purpose (Satan told Christ to bow to him and he would give over the kingdoms of the world). We discussed when studying chapter 4 that the evil in the temptations were for Christ to act on his own apart from the direction of God and his will. Jesus did not succumb to the temptations, choosing rather to answer Satan with Scripture that demonstrated Christ’s reliance on God’s direction.

In chapter 14 Jesus again goes to a wilderness, it appears, to teach his disciples these same lessons made clear through the temptations of chapter 4. The hunger of the crowds is at issue in verses 15 through 21. When the disciples relate that fact to Jesus with their conclusion that he should send the crowd away, Jesus responds that no, they should provide food for the crowd (14:16). They resist saying that they do not have enough food. Christ then teaches them that when a difficulty arises, they should rely on him. He multiplies the loaves and fish to satisfy the crowd, and the disciples significantly end up with 12 baskets left over (one for each of them) emphasizing the teaching to look to Christ to supply their needs.

Next Jesus tells the disciples to head back to Galilee across the sea and he would join them after he sent the crowd away. Later as the disciples are fighting a storm, Jesus comes to them walking on the water. Peter’s faith prompts him to ask Christ to call for him, which Jesus does. Peter then also walks on the water to Jesus. When his faith falters, he calls out to Christ who saves him. Jesus mildly rebukes Peter for his faltering faith (which is also a rebuke to the rest of the disciples who didn’t even take the first step). Through this Jesus teaches them to rely on him for protection.

When they land at Gennesaret, the people recognize him and again come to him for healing. Matthew describes that the difference in this healing episode is that they want only to touch the fringe of his garment, expecting healing as a result. And they are not disappointed. But Matthew, significantly, mentions not just touching his garment, but touching the fringe. The picture is of the people bowing down to Christ to touch the hem of his garment to receive healing. This teaches that the glory belongs to Christ in worship.

These three events—the feeding, the protection, and the bowing in worship—mimic the temptation events. But whereas Satan wanted Jesus to act apart from God in the temptations, Jesus shows the disciples how to respond to situations by turning to their Lord and God.