We are in a section of our outline of Genesis in which we are discussing the relationships God developed in the beginning. Let’s take a look at our outline so far.

C.     The image bearing of humans

In discussing the nature of the days of creation, I mentioned that I don’t think the chronology of what happened each day is the point of Genesis 1. I think the assigning of the creative work of God among the days was a literary approach to enhance the lesson of the days relative to both creation relationships 1 (God and physical creation) and 2 (humans and physical creation). However, I do believe that creation took place in the six actual-day frame mentioned in Genesis 1 for two reasons. The first reason is in opposition to old earth ideas being based on the record of death. The Bible’s insistence that death came about for humans because of the conscious choice to seek truth, goodness, and beauty from creation rather than from the Creator is an absolute fundamental of the biblical story. Further, physical creation’s curse was hinged on that turning away by humans, not separate from it. Thus, death for physical creation beyond humans (particularly animal death) was also contingent on human sin. And that is also a fundamental concept on which the whole redemption story rests. It is physical creation (which includes the physical part of the human construct) for which Jesus died to redeem, thus enabling the restoration of our spirits to God. (We’ll be talking about that in more detail when we get to Genesis 3.)

The second reason for a literal seven-day timespan regards the lesson of the days, pointing to both creation relationships 1 and 2. God uses the seven days to show first his relationship with his creation. Verse 1 tells us that he made everything from nothing. So he wasn’t just a powerful being that happened upon this material which he would then form. He is Creator of it all—thus, in a sense, owner of it all. But he also isn’t a God of a deistic viewpoint that created and let’s go allowing creation to run its course. The material God created from nothing was, as Genesis 1:2 explains, formless and empty. God emphasizes in the rest of chapter 1 how he intimately engaged with creation to alter those problems by both forming the domains of light, sky, seas, land, and vegetation, and then populating those domains with the occupants of sun, moon, stars, birds, fish, and animals. So God is over all creation both as its Creator and former. Creation reflects his glory, and as its creator and sustainer, he rests on the seventh day, allowing creation to shine as his reflective glory.

Although humans are also created and thus are in the same reflective relationship as the rest of physical creation, God purposes for them to be image bearers of his and, thus, rule physical creation as he does. Humans, therefore, also are meant to rest on the seventh day, showing their dominion over creation, allowing creation to shine in the glory of their image-bearing dominion. And for that reason, the seventh day is pronounced holy. That image is repeated also throughout the Bible, particularly for Israel, in Daniel, and as the final week of restoration accomplishment by Christ.

So, the seven days, I think, are important to maintain although the point is not to show the chronology of how God created but rather to show the lesson of these first two relationships that God has with creation and that humans were to have with creation.

But the image bearing of humans has more to do than ruling. To rule they needed structure and characteristics so that their rule would be as God’s rule. And we talked about some of those structural similarities, starting with the multiple existence in one essence. We mentioned the image-bearing characteristics of existence, which were the activities of comprehension of God’s TGB essence, concurrence with his TGB, and communication of it, all in our multiple persons. We also discussed the image-bearing characteristic of oneness of essence, which is our physical actuality.

And all that image-bearing structural design we included in a chart to help us bear it in mind: 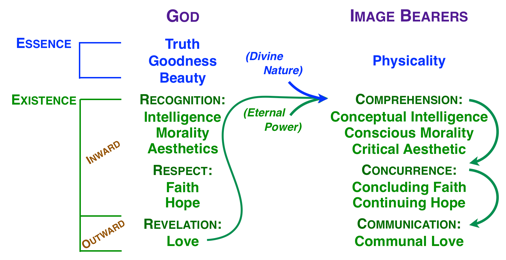 Now, these four relationships of creation can also be categorized and actually need to be categorized to prevent confusion. Here’s how the confusion can develop—take a look at the division below:

Note that the three Persons of the Trinity are who we commonly refer to as Father, Son, and Spirit (although those names may not be as distinguishing as we think; but that’s a discussion for another time). Under image bearers, we have designated two persons based on Gen 1:27 in which God declared he created human in his image, he created humans male and female. While our comparison chart above looks all structurally and categorically correct and supported by the text, a problem should be recognized that makes our chart off the mark by a bit. Our “2 Persons” of male and female align along the “Existence” category. But how do we tell the difference between male and female? Is it by their spirits? Well, no, we tell the difference based on their physical characteristics. We know who is male and female by bodily form. But bodily form—physicality—is aligned with the “Essence” category, not “Existence.” And thinking about it, we surely quickly see that if existence indicates persons, not all males (or all females) are combined as one person. Multiple males and multiple females make up the multiplicity of human existence. Our chart should then be changed:

And while that looks fine, it raises the question of why God uses “male” and “female” to designate the multiplicity in Gen 1:27.