While Genesis 1 begins with the presumption of God, to read it intelligently requires that we know something about who this God is. One first thing we should understand about God is that he is infinite, and that too is one of the purposes for beginning the book declaring that God made everything. The infinite is by definition not limited, not bound, not finite. When we read in 1:1 that God created the heavens and the earth, we learn that God is outside or transcends this whole universe. Nothing in it—his creation—therefore, limits or bounds him. That idea is also behind the frequent mentions through Scripture of God as Creator. It emphasizes that tremendous transcendence beyond us. Likewise, several verses mention that infiniteness of the omniscience, omnipotence, and omnipresence of God (Psalm 147:5; 1 Chronicles 28:9; Jeremiah 32:17; Matthew 19:26).

The emphasis of infinitude and transcendence has led some people to think God is unknowable. But while it is true that limited creatures such as we cannot fully know or appreciate God, we can know and appreciate as much as our limited abilities allow. The concept of the infinite surely comes into play in other regards. We cannot comprehend the infinitude of numbers or distance, but we can use those things in part quite well. So too can we understand all that God has revealed about himself.

But infinitude relates to something. We don’t just think of infiniteness by itself. We think of infinite numbers or time or something. Who is God in his infinitude? The ancient philosophers (Parmenides, Socrates, Plato, Aristotle) theorized about properties of ideal or perfect Being. Those properties of ideal Being became known as transcendentals—ideals that transcend the mundane to perfection.

One such transcendental was identified as unity or oneness. However, I find that somewhat redundant to being. Three others form a triumvirate under which all other virtuous attributes may be categorized: truth, goodness, and beauty. The early church fathers picked up on this classification, understanding God’s attributes to be collectively grouped under these three. And if we see God described as these. Here are some passage examples:

These three—truth, goodness, and beauty—make up who God is in his essence. God’s existence can be thought of as what God does based on his essence (who he is). First, God recognizes his essence. In other words, God exercises his intelligence in his infinite truth. He exercises his morality in his infinite goodness; and he exercises his sense of aesthetics in his infinite beauty. Not only does he recognize his essence, he also actively respects his essence. Respect is to consider something worthy of esteem. He does this by his faith—firm, unquestioning belief—and by his hope—desire with expectation. I know that characterizing this recognizing and respecting his essence as activities may sound a little odd, but although they are inward activities, they are nonetheless activities. But God also acts outwardly. He does so by revealing his essence, and that activity is love. A simple, encompassing definition of love is giving of self for the benefit of others. And this activity is exactly what God does with his truth, goodness, and beauty essence as he reveals it—he reveals and expresses it for the benefit of those to whom he reveals. 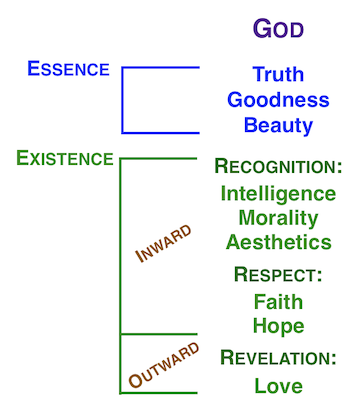 Made into a chart, the essence and existence can be pictured this way:

What then is God’s most notable attribute. Notice carefully I’m not talking about his most important attribute. We can’t look at, for example, his goodness and his beauty to try to decide of which he has more. He is infinite in both, so comparisons of that order do not work. However, we can look to an attribute that may bolster or guide his other attributes as they find expression with us. How do we view God? What attribute guides our understanding of all who God is and does?

Some people argue that God’s most notable attribute is his holiness. We read in Isaiah 6:1–3: “In the year that King Uzziah died, I saw the Lord seated on a high and lofty throne, and His robe filled the temple. Seraphim were standing above Him; each one had six wings: with two he covered his face, with two he covered his feet, and with two he flew. And one called to another: ‘Holy, holy, holy is the Lordof Hosts; His glory fills the whole earth.’” This picture of God in majesty is awe-inspiring. And it has prompted noted theologian, philosopher, apologist R.C. Sproul to conclude that holiness is God’s most notable attribute:

While I have tremendous respect for Sproul, who truly was a brilliant thinker, I think he has missed something with his insistence here. Let’s look at the word translated holy. It is the Hebrew qadowsh, which means apartness, separateness, sacredness, transcendence. Consider that along with our definition of attribute, which Merriam-Webster’s unabridged cites as “an intrinsic quality naturally belonging to a thing or a person.” In its definition, holiness is a word of contrast. While describing showcasing something or someone as more pure, more dedicated to the godly, more brilliant in its attribute, it does so by pointing out in contrast to something that is not so holy. Holiness is characterized by being separate, and therefore necessarily separate from something else.If an attribute is an intrinsic quality naturally belonging to a thing or person, and the quality requires something elseto define and distinguish it, whatever that something elseis must necessarily exist to supply that contrast. Yet God is the only necessary being. Therefore, holiness cannot truly be a naturally occurring intrinsic quality.

Think of it this way. Before creation—before Genesis 1:1 when God created the heavens and the earth—what was there besides God? Well, nothing. God was everything—the sum total. If there was nothing else, what was he separate from? What was he apart from? What was he transcend to? There was absolutely nothing that we could use to register meaning in applying such words. Since without creation, we could not call God transcendent, we can’t affirm that holiness is his most notable attribute.

What then is that attribute that helps guide the others, especially to our understanding? Remember that everything we know about God (all his attributes) have been revealed to us by God. We know nothing about God except by his revelatory activity. What had we concluded about his revelatory activity in our discussion so far? We had inward activities of God of recognizing and respecting his essence in understanding, faith, and hope. But his outward activity in revelation is his love. God makes himself known to his image bearers through his expression of love. We know of all God’s attributes summed in his truth, goodness, and beauty on the guiding basis of his love. And that makes love God’s most notable attribute because for all things about God to be known, they depend on his revelation in love.

Does the Bible put such an emphasis on love? I think it certainly does. Jesus emphasized the Old Covenant’s foundation in love when he replied to the lawyer’s question about the greatest commandment by saying that all the Law rested on the commands to love God and to love others (Mt 22:40). Jesus also emphasized the New Covenant’s focus on love when Jesus told his disciples at the Last Supper that he was giving them a new commandment—to love one another. How could this be new since he had emphasized it as integral to the Old Covenant’s foundation? Jeremiah 31 provides the key in insisting that the New Covenant would hold the Law written on hearts. The contrast shows a movement from mere following the written dictates to understanding and adopting those dictates as your own because of a new foundation of Godlikeness in a renewed, restored heart of love. Finally (or rather, also), Paul’s declaration in 1 Corinthians that love triumphs even faith and hope is remarkable and instructive. We come to be called children of God through faith, being justified by faith. We hold the brilliant light of hope of eternal glory with God. Yet Paul says love is greatest, and it is so because everything—everything—of origin, purpose, and destiny rests squarely on love. We may have faith, we may have hope, we also may love all because God loved us, revealing his truth, goodness, and beauty to us. And that basis of love leads straight to God’s purpose in all of creation. God created to enjoy everlasting love relationship with and among his image-bearing creation.

Another preliminary we should discuss of God is how his infinite truth / infinite knowledge are used with us. In the past 20 to 30 years, the idea of Open Theism has come to the forefront for many Christians. Open Theism is the idea that the future is unknowable. God may be surprised and change his mind by the free choices he has allowed by the free will of his image bearers. While I believe the Open Theist is correct that since the future has not yet occurred, it is not looked at by God as something already determined and complete. The future is potential and possibility precisely because it has not yet been realized. However, Open Theists, I believe, think too little of God’s infinite knowledge. If I can predict with some degree of accuracy the reactions of people I know well to certain stimuli, how very much more can a God of infinite understanding of his image bearers, anticipate—not just reasonably well, but—infinitelywell how every factor of every influence will motivate and move these creatures he has created. He knows the hairs of our heads, meaning he knows everything about us. While free will remains, God yet knows his creation so well that nothing will be surprise to him in the simplest sense of the word. God knows all his creation infinitely well so that he is assured of the future; he involves himself in his creation to accomplish his purpose; but he does not coerce, thus enabling true love relationship.